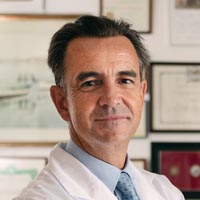 Educational Commision for Foreign Medical Graduates U.S.A (ECFMG) Certificate and "European Board of Urology" Certificate, granted by the European Association of Urology.

Advanced course of urologic laparoscopy at the urology department of the Klinikum Heilbronn Hospital in Germany.

Director of 45 Laparoscopic Radical Prostatectomy Practical Courses, held at the La Paz Hospital between 2003 and 2007.

From 1986 to 1991, research on the pathophysiology of metabolic acidosis in transileal urinary derivations and his treatment with nicotinic acid (thesis topic).

Scholarship for Foreign Studies (1991) from the Spanish Association of Urology. Study of the vesicular neurophysiology and the physiology of erection.

Study of the topographic anatomy of the penile arteries and morphometric erectile tissue of the human penis, in collaboration with Dr. Javier Regadera from the Department of Morphology at the Autonomous University of Madrid from 1993 to 1998.Thesis topic from Mr. Emilio Julve Villalta, entitled: Anatomical, morphometric and immunohistochemical study of arteries and cavernous structures of the human penis.

Research help of the Foundation for Urology Research in 1996 and FIS Scholarship (96/2135) for the Project: Hematogenous spread study in prostate cancer, by detecting circulating tumor cells using polymerase chain reaction.

First prize of the Foundation for Urology Research in 1999 for the Project: Correlation between phosphatase tissue levels and activated by mitogen (MKP-1) kinase-1 protein and Gleason score in patients with localized prostate cancer.

Node IIB researcher of the RTICCC Network from the Institute Carlos III for cancer research, since 2004.Grant for R&D activities (2+2) between research groups of the Community of Madrid in biomedicine.Coordinator Dr. Santos Mañes Brotón.

Principal Investigator of one of the 7 investigating groups from the program Inmunothercan, which investigates the tumor immunity and cancer immunotherapy within the program of activities R & D (2 + 2) between research groups of the Community of Madrid in Biomedicine (B.O.C.M Num.308, pg 30, orden 6680/2011; BOCM-20111228-13).

Staff member from the Urology Department at La Paz Hospital from 1991 until 2007.

Member of the Committee of Experts on Urological Tumours of the General Directorate of Planning, Training and Research of the Health Counseling of the Community of Madrid since September 1993 (BOCM, 08.11.93, Num. 18: pg 18, resolution 119/1993).

Member of the "Office of Continuing Education" of the Spanish Urological Association since January 2001.

Director of the 'Resident's Office' (Office for resident physicians) of the European Association of Urology from 2002 to 2011.

Member of the Board of the European Association of Urology since May 2004 until 2016.

Chairman of the "Section Office" of the European Association of Urology from 2008 to 2016.

Associate Editor of the journal "Archivos Españoles de Urología" from 1990 to the present.

Member of the Editorial Board of the journal "Urology Integrated Research" from 1996 to 2001.

Director of the video publication 'School of Urological Surgery’ from January 2005 to December 2007.

Reviewer of European Urology from 2001.

Member of the ‘Editorial Board’ of European Urology since 2006.

Author of 53 chapters in books (10 as first author and 4 of them in english with international diffusion).

Presentation of 444 communications at scientific meetings (131 as first author).

More then 40 awards for scientific papers and videos